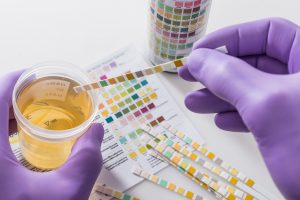 Urine tests: These have about a 72-hour look back period, although they can detect drug use up to one week prior. This is especially helpful for employers who are concerned an employee might have drugs in their system. Even if they don’t “feel” impaired, they could still technically be under the influence, and thus a risk for the company. Lab-based urine testing is the gold standard and most defensible testing method. It is the best choice for testing in any situation that is not highly time-critical.

EtG tests: Alcoholic beverages contain ethanol, also called ethyl alcohol, which is produced through fermenting sugars using active yeasts. EtG (or Ethyl Glucuronide) is a direct metabolite of alcohol. EtG is only evident when ethanol is ingested and is not produced as a result of fermentation. There are two main ways of testing, hair and urine. EtG is not appropriate for workplace drug testing because it does not detect current impairment during working hours. The presence of EtG in urine is an indicator that ethanol was ingested for up to 80 hours previously. Hair indicates ingestion within the last seven to ninety days and can provide a behavioral indication of excessive use. The detection of EtG in hair is a measure of chronic excessive alcohol consumption. Its uses include:

The types of tests listed above are provided using several drug/test panels.